In a just world, Stalcup’s name should be included amongst the new breed of artists including Isbell, Simpson and Stapleton who are marrying tradition and truth. 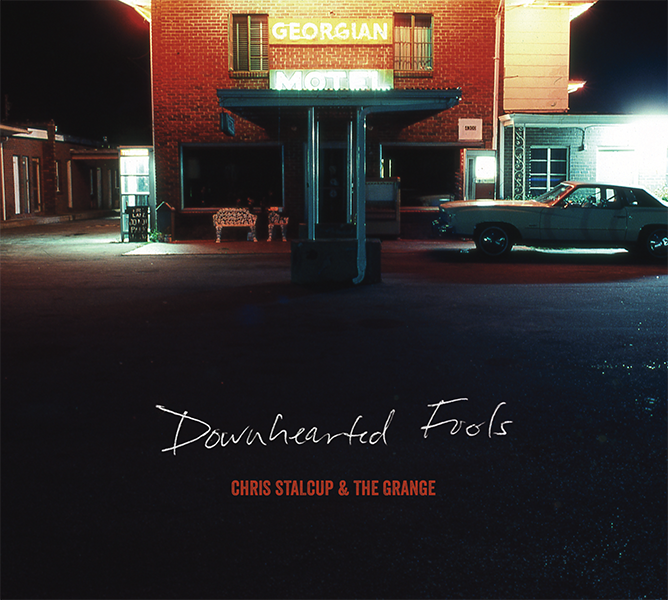 Available now
“Downhearted Fools” is a ragged rocker that burns with electricity and hard charging vocals that echoes the Drive by Truckers at their most “Saturday night.”
iTunes
Bandcamp
Downhearted Fools
2016 on DirtLeg Records.
Get Band email for free at ReverbNation.com
PRESS

“With a grizzled voice steeped in realism, Atlanta’s Chris Stalcup is one of the best songwriters America has yet to hear. Pulling no punches, Stalcup’s Saturday night songs tug at blue collar heartstrings with honest emotion.”

“Downhearted Fools” is the kind of track that makes your silent night with friends feel like a somehow hopeful movie—an ounce of heartland rock that gives warmth in collective nostalgia.”

“Downhearted Fools” is a ragged rocker that burns with electricity and hard charging vocals that echoes the Drive by Truckers at their most “Saturday night.” Stalcup offers a set of well worn pipes that speak years beyond his album count, giving the artist a sense of integrity and poignancy.

“On his new single, “Downhearted Fools” (taken from his forthcoming record of the same name), Stalcup blends an electrifying barrage of guitar lines and brazenly rustic rhythms into a home for his well-worn, intensely personal narrative… It’s country music that stands outside of time, that relies on experience and geography to establish its rightful ownership. It’s the sound of Southern life turned up to 11 and baptized in the waters of the Mississippi River.”

“They serve Stalcup’s vocal delivery very well, which I can easily pin point as early Mark Kozolek if he had an inspired weekend of Gram Parsons, some whiskey, and some Stax ‘45s. Whether he’s with Chase 56, solo, or with the Grange, it’s damn near impossible to not respect Stalcup’s dedication and love for the music he makes. There is real heartbreak there, whether his or those around him, and he definitely uses his songs as an outlet for that.”

“Slogging out rugged, honest and hurting’ country rock that as times sparks fond echoes of Mike Cooley’s contributions to the Truckers, Chris Stalcup & The Grange are out with a pretty darn fine new album, Dixie Electric Company. Longtime Atlanta music fans will certainly recognize a few familiar faces in the lineup. Not concerned with exclusively playing the “cool” venues, you can regularly find Stalcup and co. performing for the unwashed at all manner of small-town drinkin’ holes and time-warp dive bars in the OTP outskirts of town. Gotta love that.”

Please go to the Instagram Feed settings page to create a feed.

Passion meets purpose—it’s a good way to describe the essence of what’s driving Chris Stalcup and the Grange’s sophomore record Downhearted Fools. Theirs is a sound like a bonfire raging behind some small-town dirt-road shanty, of a band valiantly laying bare its soul while everyone dances wildly, moonshine drunk in the Southern night. Stalcup and his band channel Gram Parsons-influenced Stones tunes like “Honky-Tonk Women” and “Wild Horses,” occasionally coming off like a collaboration between Son Volt’s Jay Farrar and Drive-By Truckers’ Mike Cooley. The songs are deeply authentic and unapologetically Southern.

Downhearted Fools is Stalcup’s second solo release on DirtLeg Records, and it has become evidently clear that the Atlanta native knows how to write a song, and more importantly, knows how to write a song about what’s real. Case in point, the new record’s “Pete and Clyde,” a nod to Stalcup’s two grandfathers—one of them, Pete, a veteran who lost his arm in the war, but “learned to shoot a pistol left-handed better than most men can write their own name.”

Stalcup’s stint with his old band Chase Fifty Six, and his debut solo record, Dixie Electric Company, led the hard-charging singer/songwriter to open shows for artists like Lucero and Shooter Jennings, piquing the interest of the Americana press, from No Depression and Nine Bullets to Routes & Branches and Bucket Full of Nails. But even through these successful projects, Stalcup had only one foot in music, and the other planted safely in a two-decade spanning career in advertising. But as he began to write the songs that would become Downhearted Fools, he took a leap of rock & roll faith.

After corralling some of Atlanta’s premier musicians, he threw caution to the wind, and quit his day job, embracing a lifelong dream, but also a new set of anxieties and risks—like how to pay the mortgage on a touring musician’s income. “I finally pulled the trigger to where I could hit the road and concentrate on music full time,” Stalcup says. “Just faced the fear head on and went for it.”

“I’ve always been taught to follow a more traditional work ethic,” he continues, “to put my nose to the grindstone and work hard at a job. So it was a shock to my system, and those close to me, when I struck out on this new path.”  It’s a move that took guts. And—coupled with his new life on the road—it has been a driving force inspiring the new album.

Downhearted Fools explores life on the road, metaphorically naked and staring into the void of uncertainty. It’s as if Stalcup is looking in the mirror and seeing for the first time with clarity the man staring back at him. The mistakes he’s made, the triumphs he’s celebrated. And now, with the highway beneath him and a seasoned band behind him, he’s found the courage to be vulnerable, to plumb the emotional depths, both ego and fear be damned—as he sings on the album’s opening track, “Deliver me to the shores of St. Catherine, where the devil don’t dare stay.”

It’s also important to frame Downhearted Fools in the context of a failed relationship (a recent casualty of his new life on the road), of Stalcup losing his beloved canine companion of 14 years, and of chalking up his third year of sobriety. As you can imagine, the internal angst and struggle led to a flurry of new songs, written on the go whenever the spirit moved him.

Instead of falling back on old habits and cutting and running for the bottle, Stalcup faced the music. Literally. He turned challenges and obstacles and heartache into something positive, the band working through his new songs at soundcheck and in front of packed barrooms on tour. And he tracked them the very same way—live, raw and spontaneous—while working on Downhearted Fools with producer and engineer Ben Price (Little Tybee, Hello Ocho, Faun and a Pan Flute, Book of Colors) and producer Bret Hartley (Sugarland, Eliot Bronson, Sonia Leigh). Listening to the record, it’s as if you’re hearing Stalcup and the Grange from the front row of a smoky dive bar, kickin’ and gouging in the mud, blood and beer—the band is tight, the songs are real, and Stalcup’s potent yet wounded drawl reaches out, grabs you, and pulls you along for the ride.

“These days,” Stalcup says, “life has been a lot like picking up painting again, and knowing that making a brush stroke to the left or to the right or using an unintended color isn’t going to ruin the whole thing. Really it’s taking chances and perseverance that matter most.”